Characterised by bold, black outlines and solid, clean designs, Traditional tattoos are said to be dated back to over 2,500 years ago; creating a cornerstone for many other genres of tattoo art to emerge thereafter.

Traditional Americana tattoos flourished in the late 1800’s after sailors and soldiers would adorn their bodies with meaningful imagery to not only carry memories of loved ones and symbols of protection, but to mark their bodies in the event of losing their life during war.

Following the invention of the electric tattoo machine in 1891 by Samuel O’Riley, Traditional tattooing only increased in popularity among artists and clients alike. Within the first wave of hallmark Traditional tattooers include Sailor Jerry, Don Ed Hardy, Bert Grimm, Lyle Tuttle, Maud Wagner and Jonathan Shaw, to name a few.

Although American Traditional designs appear to be ‘simple’ in nature, there are a number of rules and guidelines to follow when designing a piece in this category, making it a specialty that can take years to hone and perfect. The colour palettes used are traditionally vivid colours that were thought to be the best at the time of creation due to lack of fading in the skin and the availability of pigments within the States.

Traditional tattoo designs include imagery such as swallows, anchors, eagles, ships, snakes, gypsy women, big cats, roses and daggers. Among some of the most iconic American Traditional designs are the Rock of Ages, Pharaoh’s Horses and the Battle Royale, seen below as tattooed by Lighthouse Tattoo artists Johann Ingemar, Norrie and Mark Lonsdale.

Norrie’s work is exactly as American Traditional tattooing should be; identifiable from across the street, with bold outlines, solid colour and clean designs. Her favourite designs to tattoo are Bert Grimm tigers, roses and animals. 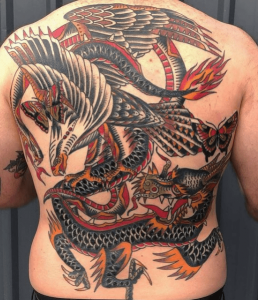 Johann is heavily inspired by Traditional tattooing history, and loves creating and recreating classic pieces from his idols. His style is incredibly clean, legible and well saturated, leaving his tattoos to age beautifully and be worn well for a lifetime. Johann’s favourite designs to tattoo are snakes, geishas and dragons. 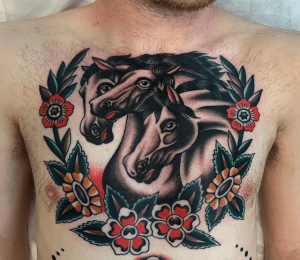 Mark is an incredibly versatile artist who has a solid background in Traditional tattooing. His aesthetic is clean, readable tattoos in both colour or black and grey. Mark’s Traditional work features beautiful artistry with a smooth shading technique and purposeful line work. His favourite Traditional pieces to tattoo are lady faces, angry felines and eagles. 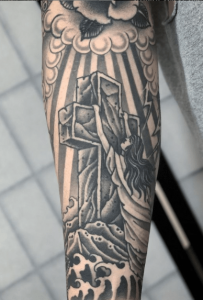