Shane started his career tattooing in Sydney’s Inner West  back in 2012 in what was one of the longest standing and well known street shops.

From here he worked in several studios across Sydney before tattooing in a private studio. He has also done guest spots in both Melbourne and Central Australia.
Shane most enjoys creating custom designs working with a bold line and colour but is also confident in fine line black and grey. These styles can range from Neo Traditional and Japanese to Ornate Geometry, Black and Grey Realism and everything in between.
Working in street shop environments for the better part of a decade, Shane is well versed in any style that is brought his way with a clean and confident hand. @lonsdaletattoo finished off this amazing black an **SAVE THE DATE**
.
@lighthouse_tattoo will be hos A beautiful pair of swallows made by @norrietattoo 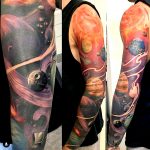