RJ began his tattooing journey in Melbourne where he completed his apprenticeship in 2017. Shortly thereafter, he moved to Sydney to cut his teeth tattooing in one of Australia’s oldest and busiest street shops Sleevemasters. Over the years RJ has travelled extensively for guest spots at iconic shops across London, Copenhagen, Berlin, New York and San Francisco as well as most major cities in Australia.

RJ’s style is heavily influenced by his 20+ years of writing graffiti, pop art, comics, and his lifelong obsession with western traditional tattooing.

Most known for bright bold designs, with saturated colours or smooth black and grey. His clean and crisp tattoos are made with the utmost care for the outcome for the client. 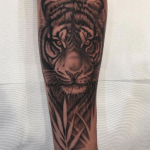 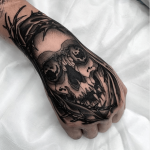