LAUREN FOX
Originally hailing from Newport Beach, California, Lauren moved to Australia at 18 and a short time later, her passion for drawing and art led her to take on a tattoo apprenticeship in 2006 on the NSW South Coast. She learned and worked there for a number of years before relocating to Sydney. And after few more years, and numerous guest spots around NSW and Australia, Lauren has joined the team at Lighthouse Tattoo. While Lauren’s background in street shops has made her a versatile tattoo artist capable of a range of styles, her signature pieces can generally be labeled as Neo Traditonal. Her work is characterised by bold lines and bright colours tempered with some finer detail, and she loves doing pieces related to pop-culture and anime.


@edgilj is such a tatt wizard! This epic piece was A beautiful piece made by @sign_of_the_wolf yester A beautiful take on this classic concept from @sha 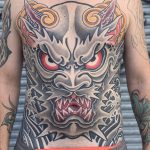 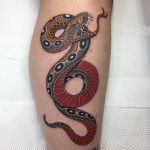