Jiho is originally from Seoul-South Korea and has been living in Sydney for 15 years now. After graduating high school, he decided to join the Korean Marine Corp where he was introduced to tattooing. During holiday break, friends would take Jiho to a tattoo studio in Seoul where he would watch how tattoo artists draw, paint, prepare, and make tattoos. At that moment, he knew this is what he wanted to do for the rest of his life.

In 2014, Jiho finished serving in the military and came back to Sydney to study fine art in TAFE and start his apprenticeship working as an artist at Goodfellaz ink in Neutral Bay. Jiho tattooed here for 5 years and is now tattooing full time with Lighthouse Electric Tattoo in Surry Hills.

Jiho was always arty as a child, and loved drawing and making objects. He recalls drawing lots of black dragons, which ironically became one of his favourite images to tattoo. Jiho likes to focus on the concept of the ‘flow’ in Japanese tattooing, particularly through elements like wind, water, waves and clouds. With these elements, he aims to encounter the flow that arises from each body shape and muscle. 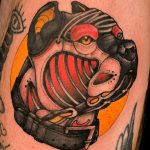